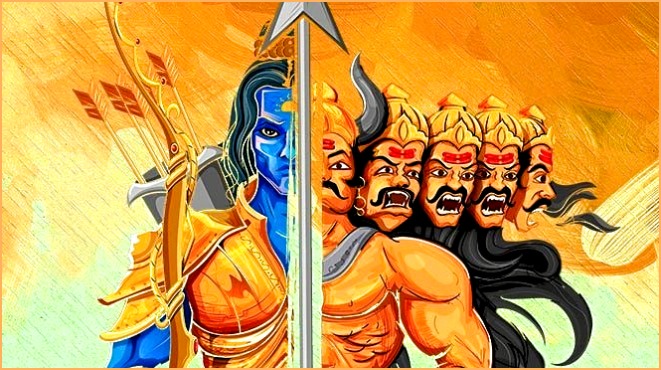 Dussehra is derived from the Sanskrit word ‘dasa’, meaning ten, and ‘hara’, meaning defeat. The festival signifies the defeat of a ten-headed evil, Ravana, by Rama, the seventh incarnation of Vishnu, the Sustainer in the Hindu trinity. Not all agree on the evil nature of Ravana, especially in the Dravidian south, of which I am part. We believe that Ravana was a great king and very devout. His motives for abducting the wife of Rama, which led to his defeat and death, are not clear. Perhaps, he too was just another human.

So was Rama. Though I bear his name and much is said about how great he was, some things he did were not so good—I may be taken to task for saying this in some parts of India. Simply put, all gods, in all religions are creations of humans, with the same fault lines. You may believe otherwise at your risk.

In the South, where I am from, Dussehra is celebrated as Navaratri, meaning 9 nights and 10 days. Each of these signifies an event. Unlike in the North of India, no one here burns effigies of the ten-headed Ravana. Here, the festival symbolizes the defeat and destruction of Mahishasura, a demon in buffalo form, by Durga, the mother goddess. Each night and day is celebrated in a special way, celebrating the nine incarnations of the mother goddess Devi or Shakti.

The whole of Bengal (East of India) goes berserk on the tenth day, Vijaya Dasami, meaning victory on the tenth, which is the 10th day of the ascending moon, when Durga destroyed the demon. Streets are blocked with massive statues of Durga within marquees all through the 10 days. Communities vie with each other for the best and the most attended festival site, replete with music, dance, food, and of course, speeches. The tenth day of Vijayadasami is the most important day in the Bengali calendar. On the 11th day, Durga’s idol is taken in a procession and immersed in the river with pomp and reverence.

In the South, the tenth day of Dussehra is celebrated in honor of Saraswathi, goddess of learning. All children wait for this day. A day when all books and learning material are placed at the feet of the goddess throughout the day. No learning, no homework, no school, what joy! I was initiated into learning at the age of 3 on this day many decades ago, as were generations of children. I still remember my grandfather guiding my right index finger tracing the Tamil and Sanskrit alphabets on a plate of sand. I guess it did help. The tenth day is also when one’s tools of the trade are worshipped as Ayuda Puja.

The entire period of Dussehra is of action, learning, and growth, with the tenth day spent in reflective contemplation to create self-awareness. It’s about building relationships and nurturing them with others in the family and community. It’s about serving a larger purpose, sometimes of feeding the poor, initiating learning, and celebrating the tools that one uses in reverence. As coaches, we can put it to better use by not merely disengaging in self-reflective awareness, but once that is done, by also coaching someone in need with unconditional positive regard.

Durga, Saraswathi, Rama, and Vishnu will be proud and bless us, wherever they may be.

A Deep Dive Into Impostor Syndrome

When good things such as a promotion or parenthood happen in our lives, we gain something - an external recognition of our abilities. But soon,…

“A coaching culture is one where the principles, beliefs, and mindsets driving people’s behaviours in the workplace are deeply rooted in the discipline of coaching.…

Cultures of an organisation help in creating and shaping how the employees interact with each other and others they come in contact with. It's formed…