Mahatma Gandhi, the Coach Who Led his Country to Freedom

Gandhi, a Coach to Millions

Gandhi, almost always called Mahatma Gandhi, was a great soul and is regarded as the Father of the Nation to his country India.  At one time, he was a coach to a billion people. He exhibited unconditional positive regard, empathy, and congruence in whatever he did. His unshakeable vision was to free his country from the slavery of colonialism. Looking back at his accomplishments, Gandhi can be seen as a role model to anyone aspiring to be a coach.

Gandhi inspired the vast millions of people in India to a creative vision that many of them considered impossible. What he did was, then, considered impossible. While other countries in the world fought many vicious battles for their freedom, sacrificing millions of young lives; Gandhi faced the might of the colonists with non-violence. Whenever there was violence around him, he fasted in penance. Over time, his countrymen believed in him and listened to him. His contract with his people were the five principles of Yoga: Truth, Non-Violence, Service without Greed, Simplicity, and Principled Living.

Many people laughed and scorned him. A colonial leader called him “a seditious Middle Temple lawyer, now posing as a fakir… striding half-naked up the steps of the Viceregal Palace”—the same leader lived to see himself humbled when Gandhi led his country to freedom. In Gandhi’s own words : “In a gentle way, he shook the world.”, as his countrymen trusted him with their lives. A transformational and transcendent leader of the highest level, Gandhi reciprocated by eventually giving his own life for them. His presence was exemplified by the total absence of his ego, vulnerability, and self-aware authenticity.

Here’s a story often told about Gandhi. A concerned mother was trying to convince her son to give up eating sugar as it was making him unhealthy. Her son was rather adamant and said that the only way he would stop consuming sugar was if Gandhi told him to do so. The frustrated mother dragged her stubborn son to Gandhi and urged him to convince her son to stop eating sugar.  A pensive Gandhi then told the mother to bring her son to him after a couple of weeks. She was bemused, yet she had faith in him and so she left.

When the relieved mother asked Gandhi why he had waited a fortnight, Gandhi responded along these lines, “It would have been a lie if I told him to stop eating sugar, while I was consuming sugar myself. So, that day when you came to me, I stopped eating sugar. When I told him after a fortnight that sugar is unhealthy and requested him to stop eating sweets, I was in truth.”

Gandhi’s entire life was an experiment with truth in multiple ways, constantly changing the way he lived for the better to serve his people.

Are we doing justice to his legacy? 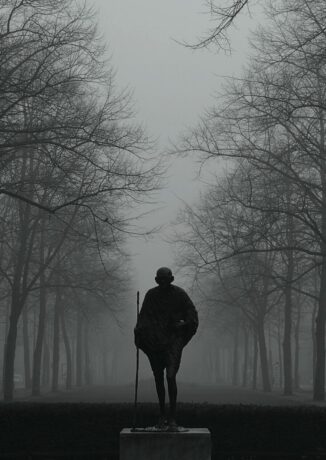 A few years ago, when I was teaching a graduate class as an Adjunct Professor at a local Bangalore University, I asked the class of nearly a hundred to list ten great leaders of the last 100 years.

One by one, students started nominating various names as I wrote them on the whiteboard. Names from Kennedy and King to Mandela and Indira Gandhi were on the board. One of them even suggested Hitler. When there were 9 names on the list, I couldn’t hold myself back, so I asked, “Isn’t there a leader that you seem to be forgetting?”. There were glazed looks all around. Tentatively I asked, “Do you recall a man who people used to call the father of this nation?” One girl responded nonchalantly, “Oh, you mean that man Gandhi?”.

It had taken barely 70 years for the youth in my country to forget a man who made them free and sacrificed his life.

He used to say, “One lives freely only by one’s readiness to die.”

So, I am sure he doesn’t care that we celebrate his birthday and the day of his assassination as a ritual when we have little faith and belief in what he stood for.

Sojourner Truth, born Isabella Baumfree, is remembered as a symbol of courage, mental strength, and resilience. But what else can a coach learn from this…

The following is the eighth, and last, installment  in a weekly series of reflections from one of our learners in the Beyond Mindfulness program. Each…

"Presence is exhibited when the coach is absent." - Ram S Ramanathan Meditation can be a powerful tool in exploring yourself. It is important for…