Coacharya has been working with neuroscientists and specialists in natural language processing (AI for the common folk) to understand the future of AI enabled coaching. Satya and Soumya are a startup, who have developed a library of neural responses to emotions, which they have linked to a speech based algorithm that tells the speaker what evokes emotional responses in the listener. Over time this may change the way we communicate, especially in coaching, training, facilitating, and even in a theater mode. Instead of training to modulate one’s voice by experience, one can now scientifically train to speak to evoke desired responses. Scary or exciting, we leave it to you to determine.

In this webinar,  Ram Ramanathan was in conversation with Satyakama Paul and Soumya Bhattacharjee (we believe they are ahead of the curve compared to global giants), with Magda Walczak being the speaker whose voice was measured for an emotional response in listeners. Have fun and learn.

Q1) What were the different things displayed on the AI dashboard

Ans: The top part with the color bars shows the emotions in the voice of the speaker. Currently, we can detect happiness, sadness, anger, surprise, disgust, hate.
Below that, the red line shows the ‘predicted engagement levels’ of the listener. How engaged the audience is depending to a great extent on the speaker’s voice. Using EEG and Deep Learning we correlated listener-engagement with a speaker’s vocal characteristics. 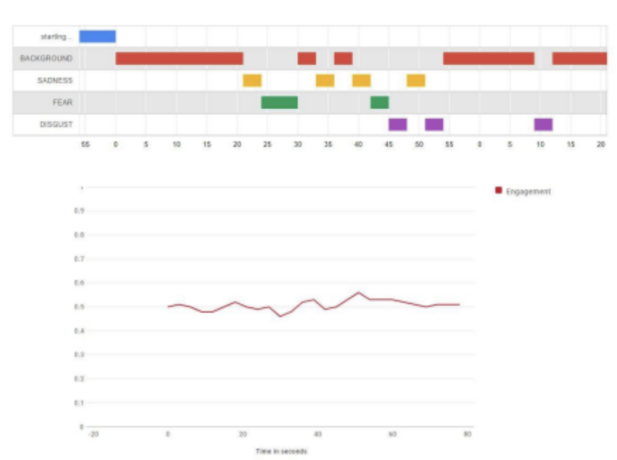 Ans: It can potentially be used as a lie detector though we did not train it as one. Certain characteristics in a person’s voice become stronger when they knowingly lie and using this tool there is a strong possibility of catching it. Unless you are dealing with Hannibal Lecter or Ted Bundy.

Q3) What is the greatest benefit to the coach?

Ans: Here are a few important ways a coach can use TrackEn:
(i) Coach Better: Use TrackEn to learn to exude certain emotions and not others. As a coach, you would probably not want to sound disgusted or fearful. Use TrackEn to speak engagingly. Make sure your mentee does not zone out and is always hooked onto the sound of your voice.
(ii) Know your mentee better: TrackEn can be used to discern the subtle emotions in your mentee’s voice and not just the sentiments expressed by their words. It is easier to make us words but much more difficult to hide the emotions in your tonality.
(iii) Create better webinars and videos- You can use TrackEn to make sure your live webinars or course videos are top quality when it comes to being gripping and engaging to the audience. You can check for any emotions that you do not want to give off and ensure you exude the right ones.

Q4) Are there any geographical/ cultural differences built into the system?

Ans: TrackEn detects emotion and engagement irrespective of language and culture. It taps into the vocal signatures that are universal and shared by people across the globe.

Q5) Does it matter if you’re speaking in your mother tongue? What if you’re not speaking fluently?

Ans: It works best if you are fluent in the language which you are using. Mother tongue or high level of spoken proficiency is the best because then TrackEn can catch the vocal emotions better. The engagement tracker is also used to practice your speaking skills. Some of our tech partners are using it in this manner.

Q6) “I am a simultaneous Interpreter and have been listening to people for over 30 years. I can tell what they are thinking regardless of these phonetic features. Can the system somehow do that?”

Ans: This is exactly what TrackEn does. Irrespective of language, there are features in a speaker’s voice that expose their emotions. This is a great way to describe what the AI is doing.

Before you start your reflective journaling journey, we’ve made this tiny brief that will guide your writing. Your reflective pieces build on each other and…

How to Create a Vision Board

Vision boards help us align our thoughts to our goals, visualize and lay down the path to success, let go of the beliefs that don’t…

Can Anyone Be a Coach?

I am an accidental coach.  If one were to look at my background, I would not have been the best fit to coach. I was…