For this Neuroscience in Coaching Webinar, we had Sushant Pradhan, Ram’s yoga teacher as a guest. Ram has invited Sushant to demonstrate the breathing techniques of Yoga Pranayama. These techniques are valuable in centering, creating awareness, relaxing, and focusing. They also have other multiple mind-body energy-positive benefits that relate to coaching awareness. 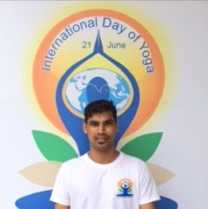 Sushant has a Master’s degree in Yoga Science from SVYASA, one of the most reputed Yoga Universities in India,  specializing in the applied yoga space of therapy and research. SYASA has an excellent research laboratory and publishes papers on the effects of postures, breathing, and meditation relating to neuroscience and bioscience in international science journals.

Sushant has deep knowledge of Vedic scriptures, including the Yoga Sutras, combining this effectively with shifts needed in mind-body behavior.

Sushant has been practicing Yoga since the age of 11 and has been teaching Yoga for 9 years. Sushant is a dynamic and inspirational yoga teacher who mainly focuses on stretching exercises with correct breathing to fetch good benefits out of it.

He has conducted PDC and SMET sessions and organized workshops for corporates in Yoga, taking it as a tool for stress management.

Sushant believes health is not a commodity that can be bargained for. Everybody has to put in effort or sweat for it.

Nishmita D'Souza is Marketing Coordinator at Coacharya. She is a firm believer that the key to development is education and awareness. She is also an illustrator by hobby. Follow her on Instagram using the handle: @damsel.in.a.doodle

5 Coaching Frameworks to Rev Up Your Coaching

These 5 simple frameworks (or coaching models, if that's what you prefer to call them) can enhance your coaching skills to mastery. Let us know…

Youth Coaching as a Career Path

Customize Your Coach Training with Electives

A lot of training institutes focus their curriculum on a particular model they developed or that they particularly like. At Coacharya, we've always thought that…